Tropical Punch Improv started from an idea had by corporate entertainment professionals. As THEY improv, the group enjoyed performing together and wanted to have opportunities to perform without the added pressure of their corporate clients. Not that THEY improv doesn't enjoy such shows, but performing in public allows more opportunities to experiment and to try new formats and skills.

This simple idea has grown to include all kinds of performances under this new brand name, but with all of the bells and whistles that THEY improv, LLC clients have come to expect. Operating as Tropical Punch Improv in name only, clients can expect all of the service and skill that the THEY improv reputation has created. 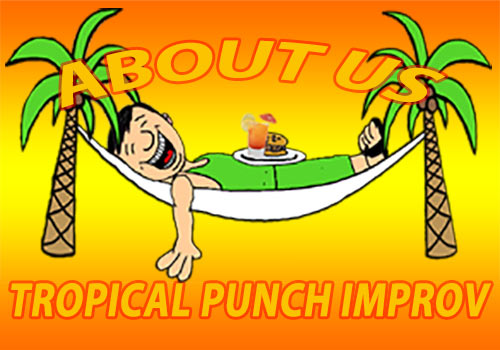 Comedy With a Tropical Punch

THEY improv began with Todd Rice, our Director. Todd had worked a variety of jobs in the business world including having been employed by the FAA through Martin-Marietta Air Traffic Systems, by the Speaker of the House of Representatives, worked on the floor of the Chicago Mercantile Exchange, for a hedge fund in Chicago, and was the CEO of a smaller technology company. All the while he trained and performed at The Second City, Improv Olympic and many other prominent theaters.

Over the years, he made contacts with great performers all over the country and started bringing some of the best performers together to help raise money for charities, calling the shows Comedy With a Cause. These shows started getting larger and companies started taking an interest.

While initially focused in South Florida, the group has expanded and calls upon actors all over the country. THEY improv has worked in all 50 US states, DC and Puerto Rico as well as in Canada, Mexico, the Bahamas, Rome, Italy and London, England. While we are based in the US, we know local performers in many countries and our clients tend to want our services wherever they are. As such, we consult with them for their events in the US while contracting local performers wherever the event might be, including throughout the Caribbean, Asia, Australia, the Arabian Peninsula and Europe.

THEY improv has worked with over half of the Fortune 500, has worked with almost all branches of the US Military as well as for the mob (which doesn't exist and we will never say different) and the FBI!

THEY improv now has Faith-Based Improv, Destination Team Building, Safety Training, Education and many other initiatives indicating a bright future yet to come.